How Magical Thinking Is Helping (and Hurting) Your Spiritual Journey 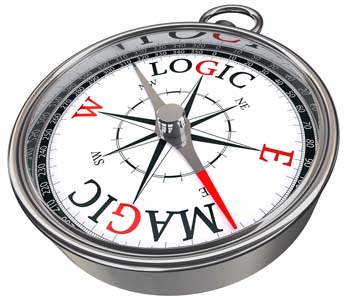 For many people who choose to explore their spirituality, there is a major misconception regarding how things actually work. Most likely, this is due to input from literature and various aspects of the media. It’s easy to come across a depiction of metaphysical practices that looks more like a version of a television or film “witch”, rather than someone who is moving along a practical road to their spiritual development (or evolution).

First off, you will need to understand the definition of magical thinking. For those who are on a forward evolutionary progression, magical thinking is absolutely essential. The reason for this has to do with the fact that there are many spiritual laws that transcend the so-called everyday thinking of the average individuals in our society.

These are the things that allow the individual to feel secure in their environment. Most people don’t want, for example, to consider the alternative realities that exist alongside of us in our everyday existence. The rules and relationships of a more expansive universe are things that they may not be ready to deal with in their current evolutionary form.

Then again, there are those who have moved past that simplistic viewpoint and are acutely aware of spiritual and metaphysical concepts that might set them somewhat apart from the average person. The first step on this evolutionary road is related directly with the development of magical thinking.

Magical thinking is a somewhat simple term that describes the ability to accept things which lie beyond the mundane physical experiences that we currently encounter as beings on earth. It’s a far cry from the “woo-woo” nonsense that some unfortunates adhere to. This means that you have accepted and are developing the means to open up your thoughts to genuine new possibilities when it comes to the nature and abilities of our spiritual selves and the way things work when considering laws that extend beyond standard physics.

How Does Magical Thinking Help Your Spiritual Journey?

It should be obvious that moving along a progressive metaphysical path requires the ability to keep an open mind. It entails maintaining focus on your progressive spiritual journey, even if you encounter others who express negative input. Remember – not everyone is ready to evolve at this point in their lives – so don’t be upset with them.

Using Magical Thinking, you will be open to seeing things that some might shrug off as mere “coincidences”. But, in essence, these so-called coincidences are really just “taps on the shoulder” in order to get your attention. By being open to this and other metaphysical teachings, your spiritual journey can begin to accelerate. It will take you in the direction that you need to go. Remember, it’s all about evolution.

How Does Magical Thinking Hurt Your Spiritual Journey?

But there is also a negative side to spiritual thinking. As mentioned in the TV and film “witch” metaphor, working within the spiritual path is not a matter of waving a magic wand. The information that you may now be privy to is only that – information. Consider a physician who has spent years of study regarding surgery. That physician will end up being useless as a surgeon without the hard work that actual surgical practice entails.

It can become easy to be enthralled by your newfound metaphysical knowledge. This can lead to limiting yourself to the idea that you can achieve spiritual benefits just by knowing these new truths. But like with most knowledge, information needs to be applied before it can be of any value.

Therefore, in order to truly benefit from the knowledge that you gain from your forward spiritual path, you need to back up that knowledge with action! Fortunately, there are literally thousands of years worth of accessible information regarding ways to utilize your new metaphysical knowledge. In addition, some move forward along their spiritual paths by assisting others. Such as you are now, in attaining new levels of spiritual awareness.

The most important thing to remember is this. Making the effort to keep an account of the knowledge that you are being led to (and practicing) and the effectiveness of the practices that are associated with that knowledge. First of all, if the metaphysical information that you receive resonates with you, then investigate it further. This, of course, requires action and not just contemplation.

Decided to act upon your knowledge. Then you’ll need to keep an accurate accounting of the results that you achieve. This will indicate to you whether or not you have encountered a spiritual path that is worth moving forward with.