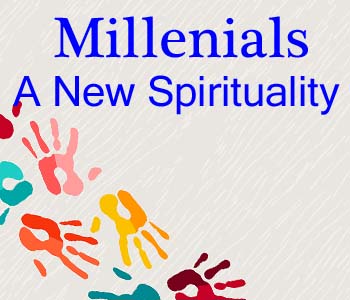 Among millennials, those who reached adulthood in the 21st century, there is a marked decrease in involvement in conventional religion. A Pew Research study reported that significantly less than half of those millennials surveyed saw religion as a necessary force in their lives. Although their views on Spirituality are surprising.

After a period of austerity, and in a world which becomes increasingly chaotic and uncertain, it seems that younger people, and quite a few older people, are finding reverence for some form of spiritual practice even as these same people turn away from more conventional modes of worship.

Maybe most interesting in all of this is that no single form of spiritual practice appears to have supplanted the old ways. Rather, younger people feel free to incorporate all sorts of practices into their lives and they do not seem to find anything contradictory about this.

Call it the triumph of freedom of choice or intellectualize it as yet another expression of the postmodern condition, spiritual practices have become a mélange of ideas, traditions, practices, and beliefs.

Although chaos magic is not really new, it has become something of a leading ideal among those who wish to incorporate a variety of ideas and practices into their daily lives.

Because it is such an amalgam of ideas and practices, chaos magic is pretty difficult to define. Essentially, practitioners begin with the fundamental premise that life and the universe is chaotic and thoroughly unpredictable, thus the name. Beyond this, chaos magic is in fact grounded in some rational processes.

Relying on mathematical calculations of probability and a reliance on what is verifiably known about the physical properties of nature, chaos magic then incorporates spiritual practices which seek to align internal energies with the external energies from which one hopes to achieve a specific end or goal.

Chaos magic often includes elements of wiccan practice and belief. The Llewellyn Journal offers a practical guide and a substantial bibliography for people who may be interested in this dimension of things.

There are elements of numerology, crystals, runes, etc. which are all figured into this practice in various ways and to varying degrees. Depending on how one practices chaos magic, one specific element may emerge to the fore over other elements. The point of chaos magic is precisely the chaotic approach which makes it possible for people to emphasize what speaks to them rather than follow a prescribed system.

Following in a similar line of chaos magic is what has been loosely termed “mysticore”. A google search of this term will turn up information similar to chaos magic. But you may end up on the website for a heavy metal band. The term “mysticore” is extremely imprecise.

At the heart of this movement is a desire toward mystical and magical ways of thinking and living. To move way from more dogmatic modes of spirituality. People in general, and particularly younger people, are seeking modes of spiritual practice which speak to their sense of themselves. Simultaneously they are also reaching toward ways of living which accord with ideals of nature which are quite old.

Thus, the investment in things such as witchcraft and various forms of pagan belief. The newer spiritual movements deeply attune believers to the natural world, and pagan spiritual beliefs. The kinds of beliefs traditionally associated with wiccan practices for example, focus toward and around nature.

In addition to the natural world, these newer movements toward magic and mysticism place heavy emphasis on artistic expression. The arts are a form of spiritual practice. These beliefs have taken on some fairly serious dimensions. New York University hosted the Occult Humanities Conference, thus raising the cultural investment in these beliefs and practices to the level of an academic discipline.

Millennials in particular like having a vast array of choice and freedom. Therefore it should be no surprise they have led the way toward more diverse forms of spiritual expression. Mysticism, witchcraft, and pagan religious ideas are the most obvious areas that characterize new movements in spirituality and spiritual practice. It remains to be seen if these practices will begin to coalesce into their own dogmatisms. Not unlike practices/beliefs like the New Age movement of the past. Or, if the younger generation is really taking Spirituality to new levels of awareness.

Visit Our Store- Download Now, Study at Your Own Pace

Why Millennials Are Leaving Religion But Embracing Spirituality