What Is New Age Belief? 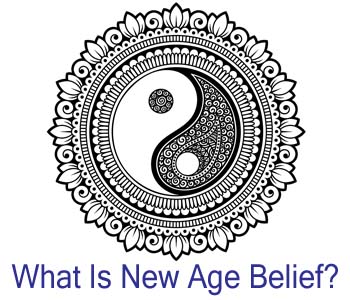 “New Age” is an all-encompassing term that attempts to group a number of different belief together. The term creates a “feel good” vibe that relates to a major shift in human spirituality. This “shift” allows people to be in touch with their inner spirituality thus benefit the whole of humanity. These teachings encourage, overall, enlightenment and a harmonious existence for all people.

But is this really the case? Or are there some caveats to consider when gearing yourself to dedicate time and effort to one or more of these philosophies. While a complete discussion of all the characteristics of New Age thinking is too vast for a single article. It’s certainly possible to find certain common links between the different belief sets. That’s because the underlying core of all New age thinking is the desire to rise above the mundane world. To extend beyond the common physicality that people experience on a daily basis in the pursuit of knowledge.

The History of New Age Belief

The first common theme of New Age thinking is the enthusiasm for the creation of a new way (hence “New Age”). This new relationship idea between people can be positive. There is to be a realization of our human commonality in the sense that we are all spiritual beings and that the appearance of physical diversity is an illusion that we need to overcome. In any case, to better understand New Age thinking, you should start with its beginnings.

While there are no clear-cut boundaries within the modern New Age communities, the popularity of New Age thinking increased dramatically during the decades of the 1970s and 80s. During this time, it was promoted by David Spangler and various metaphysical belief groups. Starting off by stating that he was able to contact spiritual entities that were beyond the physical plane, Spangler expanded his teachings to include clairvoyance and the spirituality essence residing in all things.

While Spangler’s teachings of a “practical mysticism” seemed like a new revelation to many, in fact these concepts have existed since the 2nd century C.E. – starting with Gnosticism. As time went on, these spiritual concepts are common to various groups such as; Freemasons, the Rosicrucians, Religious Science and the ideas taught in Theosophy.

Although the concepts associated with New Age originate in different places, most of the beliefs can be linked to Eastern religions. Additionally, some of the different practices of the New Age movement, that are related to the occult, include; psychic readings, astrology and Tarot readings. Healing practices include; herbal therapy, spiritual healing, acupuncture and natural healing. In actuality, there is no one all-encompassing New Age “doctrine”. The movement focuses on individual autonomy and relativism.

This can actually lead to a situation in which people, who practice certain self-help techniques, are not even aware that they are in a group that is “New Age”!

The undercurrent of New Age thinking is one of self-improvement and getting in touch with your spirituality. Therefore it can appear to be a positive way to proceed through life. After all, how can you criticize someone who is trying to improve themselves for the overall good of humanity? But with so many choices available, how do you go about selecting a New Age category that suits you best?

This can be a very difficult question to answer for someone who is just starting out in their investigation of metaphysics and different aspects of their spiritual selves. Obviously, there is no one book or chart that you can fill in, which will indicate what areas of the New Age Movement will suit you best. It’s a question of learning to understand the way that certain beliefs will resonate with you and being able to follow spiritual paths that you feel are drawing you to them. In any case, there are issues along that particular “road” that you may want to keep in mind.

Having covered some of aspects of the New Age movement, there can be confusion when it comes to pinning down tangible concepts and beliefs. It can be said that the goal of accessing your spiritual self is a step forward in your evolution. In its own way, it can be a “nice” thing. But, with just about every belief system, there are questions that revolve around its actual beliefs. With New Age, unlike an organized religion for example, the answers are not all that easy to obtain. This can lead to strange and confusing situations. Situations such as adhering to one belief system then discovering several components of another belief system that resonates more clearly with you.

The first step in understanding any aspect of the New Age movement is doing your due diligence when it comes to research.