Séance: An Audience with the Great Beyond 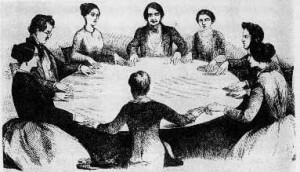 The word is often spoken in a hushed voice. It’s not something that we talk about in polite company. The mere mention of the word can provoke all kinds of responses in people. Though in those same hushed voices, many people have questions about this word and the experience that comes along with it. The word is Séance. Though Séances are legendary, often depicted in movies and novels, most people have no direct experiences with an actual séance. Merriam Webster defines a séance as “a Spiritualist meeting to receive spirit communications”.

The word comes from the French word Seoir which means to sit. Participants sit together in a circle, and reach out to those who reside on the ‘other side of life’… more generally known as the dead. During the event, spirit communication can come into the room through someone called a ‘medium’. It is also not uncommon for Spirit to make its presence known through actual sounds in the room. Those in attendance can often see a physical phenomenon called ‘Ectoplasm’ which appears as a fog or mist that is present in the room. It’s believed that ectoplasm results from spiritual energy pressing itself into the physical space in which the séance is occurring.

Spiritualist Minister Charles Cox will host this event as we ‘sit’ as a group and receive messages from Spirit Guides, Guardian Angels, as well as departed friends and family. Note: This is open to anyone genuinely seeking a traditional Spiritualist experience. Please visit www.psychic-classes.com to find the next scheduled session.

When Was the Last Time You Went to a Real, Live Séance?