Spiritualism and Its Beliefs 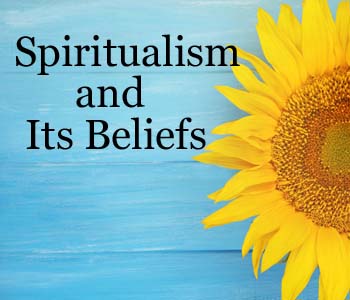 What is Spiritualism? Spiritualism is an American born religion which emphasizes communication with the dead in the afterlife. Messages often come through a ‘medium’. The Spiritualist Medium contacts the Spirit World in order to deliver messages from the departed to friends and family. Messages are a way of affirming the continuation of life after the physical body dies. At its height of popularity in the 1860’s most Americans knew about Spiritualism. And many of those had participated in a séance. A séance is a coming together of a group of people to reach out to the ‘other side of life’. Their desire is to receive messages from departed friends and family. Usually a psychic or Spiritualist Medium hosts the séance. In Occult America, the author Mitch Horowitz documents séances in the White house hosted by President Lincoln and his wife Mary Todd Lincoln.

The Modern Era of Spiritualism began in upstate New York in 1848. Two sisters Kate, 12 and Margaret, 15 began to communicate with a spirit in their home in Hydesville, NY. The girls devised a way to use a series of noises made by the spirit, they called rappings, to build a language with the disembodied soul they called Mr Splitfoot. News of afterlife  communication spread quickly, and the Fox Sisters became instant celebrities. The idea of communicating with departed friends and family captured the imagination of the nation.

Though history credits the Fox Sisters with beginning the modern spiritualist era, there is another man whose work with messages from the other side predates the Fox Sisters. Andrew Jackson Davis called himself The Poughkeepsie Seer. Importantly his talents were as a clairvoyant and psychic medium five years before The Fox Sister and the events in Hydesville, NY in 1848.

In a storyline which is familiar to our modern era, the Fox Sisters gets credited with the birth of Spiritualism (instead of Andrew Jackson Davis) because their story went ‘viral’. News of communication with the dead by the Fox Sisters was carried in a story by the newly formed Associate Press. Newspapers across the nation picked the story up in what might be the very first viral story of the modern era.

Many cultures throughout history dating back to the Samaria and Egypt have rich traditions of communication with a spirit world. Western religions including Christianity do not emphasize a connection with other worldly beings outside of the belief in a connection with God. However there have been exceptions. Emanuel Swedenborg 1688- 1772 was a Lutheran Theologian and Mystic who wrote extensively on the afterlife, Heaven and Hell. Although he was not a ‘Spiritualist’ as we would define one today, his writings give great insight into the spiritual worlds he explored. His writings become the basis of a ‘The New Church’ or Swedenborgianism which is a Christian denomination based on his writings.

What do Modern Spiritualist Believe?

Spiritualism is Alive and Well Today

Paranormal and metaphysical subjects are experiencing a renaissance in our culture. Websites, books, movies and TV shows explore the topics of other worldly existences with regularity. Ghosts and paranormal activity which just 20 years ago were taboo subjects are now common conversations today. Believer or not, who hasn’t seen Ghost Hunters or The Long Island Medium?

Séance: An Audience with the Great Beyond